For we cannot but speak the things which we have seen and heard.  (Acts 4:20)

Canada Is Extraordinary, Too!:

On Sunday, April 20, Holy Cross Lutheran in Newmarket, Ontario voted to call Lionel Ketola as associate pastor. Holy Cross is the first Evangelical Lutheran Church in Canada (ELCIC) congregation to call a pastor from the roster of Extraordinary Lutheran Ministries.
The call violates a discriminatory ELCIC policy which excludes self-declared and practicing homosexuals from the office of ordained ministry. Among his duties as Associate Pastor, Pr. Ketola will serve as Ambassador of Reconciliation within the Eastern Synod and beyond to the ELCIC. As an Ambassador of Reconciliation, Lionel will work to promote the full inclusion of lesbian, bisexual, gay and trans-gendered people in the life of the ELCIC.
Lionel will be ordained extra ordinem on Friday May 16 th at 7:30 pm at Trinity United Church in Newmarket.

In the weeks before the Sierra Pacific Synod's 2008 Assembly (April 25-27, Oakland, CA) we hear that at least one congregation received a call stating that congregations with fewer than 175 members would be allowed only one voting member at the assembly. As in years past, the congregation had submitted registration information for two voting members.
The congregation checked the Synod Constitution (S 7.21c and SB7.21.01 seem to govern this) and determined that congregations with fewer than 175 members were indeed entitled to two voting members. The issue was pursued with the synod office. A synod spokesperson explained that a 2nd voting member could be sent if a registration fee was paid. (We believe the synod constitution is silent on the matter of fees.)
When the 2nd voting member appeared at the Assembly's registration desk, she was told she'd have to pay to be registered, which she did.
This scene, however, did not go unnoticed, and as the first vote approached, a speaker rose to ask why some congregations were allowed to "buy more votes".
The assembly's most prominent agenda item is to decide who will wear el sombrero del obispo after Bishop David Mullen steps down in June. 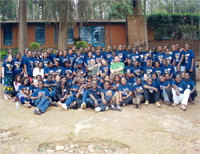 In the first ecumenical youth gathering in Rwanda since the 1994 genocide there, more than 100 high-school-age and young adult Christians from six African countries and the United States gathered March 27-30 for the Great Lakes Youth Conference: We are the Future of Africa! in Kigali, Rwanda. Participants, 75 of them Lutheran, gathered to "bear witness" to the more than 1 million people killed in the genocide and to work toward building a future of peace.
According to the ELCA News Service, participants were from Burundi, Democratic Republic of Congo, Kenya, Namibia, Rwanda, Tanzania and the United States, and represented Anglican, Assembly of God, Catholic, Lutheran and Presbyterian churches, as well as the YWCA. Participants from the United States came from the ELCA Sierra Pacific Synod, Oakland, Calif.
The ELCA News Service did not report that the one of the leaders of the Oakland delegation was Pr. Craig Minich of the East Bay Lutheran Youth Program and adult chair of the Sierra Pacific Synod Youth Committee. Pr. Minich is rostered with Extraordinary Lutheran Ministries (ELM).

The Best Construction on Everything:

In the Lutheran Church Missouri Synod (LCMS) the tug of war continues over the untimely cancellation of the popular radio show Issues, Etc.. In the wake of the April 14th silent vigil by the radio show's supporters, the synod's Board of Communication Services (BCS) and Council of Presidents (COP) met, and open letters issued by Synod President Gerald Kieschnick and the Council of Presidents. Both letters encourage the community to remember the 8th commandment:
As president of the Synod, I respectfully request and pastorally encourage all in the Synod to be patient and charitable regarding this matter, putting the best construction on actions and decisions connected therewith. I pray for the day when the financial resources of our Synod do not necessitate the reduction in force of radio personnel, the return of missionaries from the foreign mission field, or any other such difficult and painful decisions.

Extravagance (Luxuria): Who says Lutherans don't know about Luxury? When you want to indulge yourself, nothing else says extravagance as boldly as the Official LutheranConfessions.com BASEBALL CAP!

Be the Life of the Party:
Worn out your old copy of The Book of Concord?
Get a new one.
Evangelical Lutheran Worship: what's all the fuss about? Find out for yourself.
Looking for a good old hymnal? We've got those, too.
Buy books, music, and other Lutheran stuff now from the LutheranConfessions.com Store! (Frequently cheaper than Augsburg-Fortress or Concordia.)

Hot Dish Hotline: "We cannot but speak the things which we have seen and heard." What have you seen or heard that other people really need to know about? Use the Hot Dish Hotline to submit your item online.

These meetings and communications have not satisfied community of protesters who have responded with catechesis on the 8th commandment and satire.

Writing on the Extreme Theology blog, Chris Rosebrough declared that President Kieschnick is "following a well scripted, well planned Change Initiative, the goal of which is to insure that the LCMS becomes and will forever remain a purpose-driven/church-growth denomination."
Rosebrough identifies the script (an eight-stage program in John Kotter's book Leading Change) and observes that the church is currently in the "Getting Rid of Obstacles" phase of stage 5.

We were surprised to visit World Faith News this week and discover a new press release from the ELCA announcing the launch of FaithfulDemocracy.org.
Faithful Democracy aims to be a safe and welcoming space for people to discuss the role of faith in the public life and promote civic participation. According to Daniel Pieper, convener for Faithful Democracy, ELCA Washington Office:
FaithfulDemocracy.org is foremost a clearinghouse of resources created by our faith partners that discuss the legal guidelines on what political activity can be conducted by houses of worship during an election, provide how-to guides for people of faith wanting to get involved in nonpartisan and permissible electoral activities, and issue analysis from many different perspectives digesting issues that effect the lives of people of faith across this country and throughout the world.
ELCA Presiding Bishop Mark Hanson offered this endorsement:
This is a critical time for the voice of the church and our broader faith community to be heard. It is not a time for people of faith to keep their faith private, but rather to step boldly into the public square to encourage participation in our democratic process for the common good.
So far, so good, but why should any of this be surprising? Chiefly because we ordinarily get our ELCA News by email directly from the source and not from indirect channels like World Faith News. The Faithful Democracy item was posted inconspicuously on the ELCA News Blog and not accompanied by a press release or email to ELCA News subscribers. (We have to wonder how World Faith News found the item.)
If the voice of the church is to be heard in the public square, it might also be appropriate that it be heard within the church as well.

The General Conference of the United Methodist Church is underway in Fort Worth, TX, but not without controversy. Delegates and church officials have begun to question whether the conference's democratic processes have been compromised by the gift of cell phones from a renewal group to more than 150 African and Filipino delegates.
The giving of cell phones exclusively to people of color outside the United States raises concerns about racial paternalism and about the renewal coalition's influence on he delegates who received gifts. According to Bishop Kenneth Carder, a professor at Duke Divinity School, the cell-phone giveaway "crosses the boundaries of what is appropriate in this kind of community, and I hope that it would cease. This seems to be an undue influence and violates the very essence of what it means to be Christian community." A joint monitoring team from the Commission on the Status and Role of Women and the Commission on Religion and Race said the giveaway is inappropriate behavior and it destroys community."
One cell phone recipient said: "There were no strings attached to the cell phone. We appreciated it because it was a gift for us while we are here. We will use it to call friends in the United States. I do not know if it will work when General Conference is over."

Sign Up for E-Confessions: Are you tired of having to guess when the new issue of Lutheran (True) Confessions will be posted each week? Now you can sign up for E-Confessions and receive a summary of each new issue as soon as it's posted. Enter your e-mail address in the form below to sign up now.